I really wanted to title this recipe

but my WordPress said that was too long for a title. Not sure when I started following those rules, but anyways. Yes, ADHD, no to the squirrels.

I am horrible at following recipes. I am more of a tinkerer and my ADHD with this stuff shows. I have a reputation at work for my “concoctions” and have just now started writing stuff down. I tend to just throw stuff in a pan (or a bowl) and cook it. I am notorious for throwing stuff in a Ziplock bag – vegetables, beans, and whatever random spices I grab from the cabinet, and then just microwaving it all and hoping for the best when I get to work.

Most turn out fine. Some fantastic and I’m mad that I didn’t write it down.
So with that this recipe came from me googling other people’s recipes and looking at the spices they used. I’m like …. Uh, no, I don’t that, but I like that, and I don’t have this, but this should work just as well. And then a little of I’m just going to add this anyway and see how it turns out.

I was pleasantly surprised this turned out pretty good and I plan to make it again. My little Andrew, my pain in the rear eater, who likes nothing, even said it tasted good.
I did not want to add sugar in this recipe, so I used ½ roma tomatoes and ½ cherry tomatoes to give it the sweetness I wanted. However, next batch I am going to try only using a ¼ cherry tomatoes because it’s pretty sweet.

My mom said it was good, but says it tastes like sriracha sauce. So, with that I make these recipes for myself. If others like them fantastic, and if you don’t I’m good with that too. I like it and I will make it again.

With that here’s the super duper easy recipe that even a moron could make (and trust me I’m kind of stupid in the kitchen if there’s too many steps. I just wind up skipping them. So, there isn’t too many steps in this one. Perfect right? 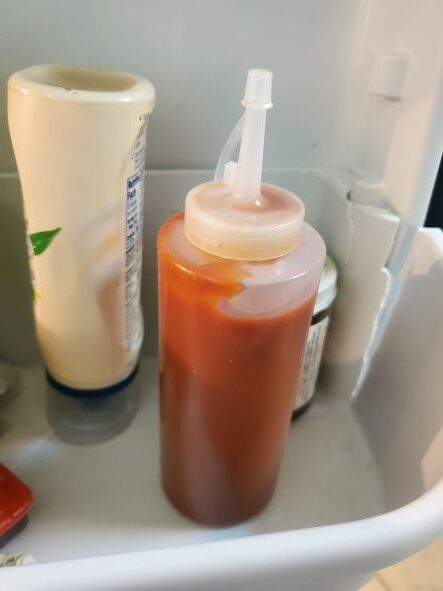